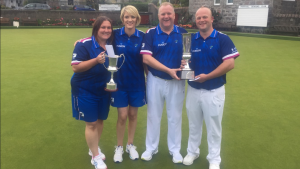 The firm which has offices in Aberdeen, Ellon and Caithness have been the main sponsor of the event for the last three years and they have committed to sponsor the tournament for a further three years. Next year will be the 45th year of the Whitehall Tournament which is widely regarded as one of the most prestigious bowling competitions in the area.

Phil Anderson, company managing director, said: “It is great to be involved with the Whitehall Tournament. We are huge supporters of bowls locally and we have also sponsored the Ellon Super Six, Oldmeldrum Fours and Cruden Bay Triples recently. Hopefully our sponsorship will help attract the top players to Whitehall for future tournaments.”

Whitehall Bowling Club president Gordon Smith added: “In the current climate getting sponsors is much harder and we appreciate the support from Phil Anderson Financial Services. “It is great that Phil has agreed to sponsor the tournament for a further three years and this sponsorship does not only give us a major boost for the tournament, but will also help contribute towards the prizes and general running costs. “The increased amount of sponsorship takes the figure donated to the club by Phil Anderson Financial Services to over £10,000 and we are very appreciative of this. Phil is one of our former members which makes this sponsorship that little bit more special.”