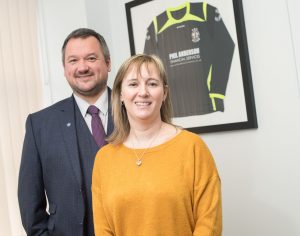 Phil Anderson, owner of award-winning Phil Anderson Financial Services, has recognised the contribution his longest serving employee has made to the Aberdeenshire company’s success by appointing her company director and gifting her five percent of his company.

Becky Shiel started working for Phil seven years ago as a part-time administrator. As work became busier she took on the role of full-time administrator before being appointed office manager just over two years ago.Becky becomes the company’s second director with immediate effect. Her five-per-cent share of the company will entitle her to annual dividends and to a share of the proceeds if the company is ever sold. “Becky has been with the company right from the start,” said Phil. “She started working for me on her birthday in March 2011 and she’s been my right arm ever since. She’s very efficient, has a fantastic work ethic and knows as much about the company as I do. She keeps me right a lot of the time and I know that I can trust her implicitly to look after things if I’m not here. “The company has seen year on year growth since launch and Becky has been a huge part of that. I wanted to do something special to recompense her for the work which she’s done to build up the business. I thought this was a way to show her how much she is valued and how much I appreciate everything she has done to help me.”

Becky said she was shocked when Phil told her what he was doing. “It came as a complete surprise,” she said. “It certainly wasn’t anything I was expecting or had ever asked for so once I got over the shock I was delighted with such a generous gesture. From the day I started working for Phil I treated it as though it was my own business because I really cared about it and wanted it to do well. “Phil has been a great boss over the years and we’ve established a really good working relationship. I’m always honest with him if he asks my opinion about anything and he’s always prepared to take other views into account.”

Phil started up his own independent financial advisory business after being made redundant in 2010. He initially operated as a sole trader before registering the company in 2011. Headquartered in Ellon, the company now has satellite offices in Aberdeen, Caithness, Westhill, Inverurie, Newmachar, Peterhead and Fraserburgh. It has a full-time staff of seven and works with two self employed financial advisors to provide personal financial advice to more than 1,200 clients in Aberdeen, Aberdeenshire and North Scotland. Services include advice on investments, pensions, savings, mortgages and insurance.